Qatar tourism growth to generates US$17.8 billion in visitor spending by 2030

Qatar tourism growth to generates US$17.8 billion in visitor spending by 2030

Qatar Tourism Authority to highlight its experiential offering at Arabian Travel Market - culture and heritage to drive visitor numbers towards 10 million target
Experiential travel, the main theme of this year’s Arabian Travel Market (ATM), is driving tourism growth in Qatar, as the country works towards its 2030 ambitions to welcome 10 million visitors a year and generate US$17.8 billion in tourism receipts.

A research released ahead of ATM 2017, which will take place at Dubai World Trade Centre 24-27 April, has revealed that Qatar is looking up to generate 5.2% of its GDP through tourism over the coming years, creating 98,000 jobs and managing an inventory of 63,000 hotel rooms
.

"A perfect example of experiential travel is Souq Waqif in Doha, which offers several small shops lined along paths with an array of Middle Eastern merchandise, from spices and seasonal delicacies to perfumes, jewelry, clothing and handicrafts," the research says.

While the country’s culture and heritage remains of paramount importance, Qatar is also set to invest up to US$45 billion in new developments under the National Tourism Sector Strategy 2030. These according to the release, includes US$2.3 billion earmarked for 2022 World Cup facilities and $6.9 billion for transport infrastructure and associated projects.

“The government, hotel operators, airlines, and other stakeholders, are now beginning to see a return on their investment into the country’s tourism sector. Once again we see the leisure industry driving growth in another major GCC destination and this is a trend we expect to continue at least until the end of the decade.”

Qatar is already the fastest growing destination in the region in terms of visitors arrivals, averaging 11.5% growth over the past five years, according to data from the QTA. The Authority’s Tourism Performance Summary, for the third quarter of 2016, recorded arrivals of 2.18 million visitors in the first nine months of the year, including more than one million GCC nationals.

Qatar’s Hamad International Airport (HIA) saw passenger traffic jump 20% in 2016, handling some 37.3 million passengers, a leap of 7.3 million from the previous year. The surge is partly attributed to the operator Qatar Airways’ fast growth, which included 14 additional destinations last year. The airline giant has also announced the world’s longest flight by duration - a 17+ hour route from Auckland to Doha"QTA says.

"In order to deal with the expected demand, Qatar currently has 22,921 hotel rooms with a further 15,956 rooms under contract, representing a 69% increase in total stock in the current pipeline. The country posted a decline in hotel performance across all key metrics over 2016, as overall occupancy dropped 12.2%, ADR fell by 7.5% and RevPAR fell by 18.8%. 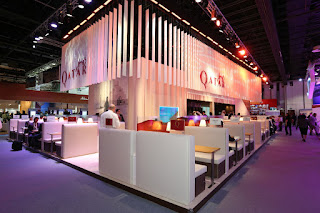 Posted by Zainab JUNAID at 06:22 No comments: