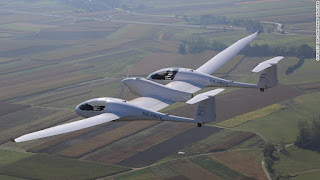 Recent research has revealed that the dream to attaining a sustainable and seamless air travel will soon come to reality as a team of researchers in Germany flew a plane that emits water vapor into the atmosphere.
The twin-cabin plane known as HY4 uses a hybrid system of hydrogen fuel cells- devices producing an electrical current from a supply of hydrogen and oxygen -- aided by a battery for extra oomph during takeoff, and a lithium battery to fly.
Researchers affirmed that the four-seater aircraft had its maiden flight from Stuttgart Airport in Germany in September. “It's the result of collaboration between aircraft manufacturer Pipistrel, fuel cell specialists Hydrogenics, the University of Ulm and the German Aerospace Center (DLR)'s Institute of Engineering and Thermodynamics,” they said.
"This is the first time that somebody has built an airplane that can carry more than one person and which is driven by hydrogen," Andre Thess, director of the Institute of Engineering Thermodynamics at DLR, who sees HY4 as a major leap toward decarbonizing air travel, commented on the development 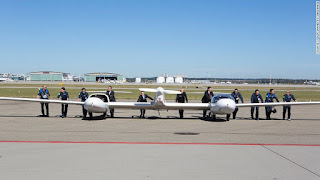 He added that “Emission-free planes could be the air taxis of the future. The team aims to use fuel cells to power small and medium-sized passenger planes, which could change regional air travel and provide an alternative to carbon-emitting airplanes, buses and trains.
Josef Kallo, HY4 project leader at DLR and a professor at the University of Ulm, thinks we could also see emission-free air taxis flying from city to city within the next 20 years.”
"Say you want to go between Irvine and Ventura in the Los Angeles area. It can take you between one and a half and three hours if there are traffic jams, but by plane it will take you around 35 to 40 minutes.
"And within a controlled airspace you could have a lot of these planes flying around."
The electrical system is also very quiet compared to conventional planes, as it does not have the same loud combustion roar as a jet engine, which makes it ideal for flying near residential areas, Kallo says.

Posted by Zainab JUNAID at 03:23 No comments: