Medview Airline will on November 20 commenced flight on the Lagos-London route. The Managing Director and Chief Executive Officer of the Airline, Alhaji Muneer Bankole disclosed this yesterday adding that the United Kingdom and Nigerian civil aviation authorities and their foreign affairs ministries had given the airline necessary approvals required to operate direct flight between the two countries.
Unlike the other London flights which birth at the Heathrow Airport, the airline would be landing at Gatwick Airport.

The MD said the airline deliberately chose Gatwick Airport to cater for people from up North and South in the United Kingdom, adding that the airline had secured slots at Gatwick Southern Terminal to provide train services to passengers travelling to other parts of UK.

He said limousine service has also been provided for business class people.He also noted  that London - Lagos route has remained one of the busiest routes in the world and yet the most expensive.

The CEO explained that Med-view entered the route as a Nigerian flag carrier to supply the missing link which includes capacity, reasonable fares, good customer care and excellent in-flight entertainment."I am happy to inform you that our Inaugural Flight from Lagos - London Gatwick is Friday, November 20, 2015. We are starting with four weekly flights on Sundays, Mondays, Wednesdays and Fridays", he said.

The inaugural flight would coincide with Med-view Airline third anniversary of its commencement of domestic operation on November 8, 2012.
Posted by Zainab JUNAID at 23:39 No comments:

18 NAMA ENGINEERS OBTAIN ATSEP LICENSE
ZAINAB JUNAID ELESHO
A total of 18 air traffic engineers in the Nigerian Airspace anagement Agency (NAMA) are to be issued with the Air Traffic Safety Electronics Personnel (ATSEP) License by the Nigerian Civil Aviation Authority (NCAA). This is just as the air traffic engineers drawn from various airports across the country successfully passed their practical and written examinations conducted recently by the regulatory authority. Prior to this examination, they had also successfully undergone a three-month ATSEP License Preparatory Course between July and October, 2015, at the Nigerian College of Aviation Technology (NCAT), Zaria. The ATSEP course which came in Seven Modules treated topics in Meteorology, Avionics, Aircraft Systems, Air Traffic Control Operations, Aeronautical Communications, Navaids, Surveillance and Electromechanical systems. In a statement, the Managing Director of NAMA Engr. Ibrahim Abdulsalam, congratulated the engineers for “displaying extreme commitment to the goal of improved air safety in Nigeria by taking their studies seriously’’. Engr. Abdulsalam noted “with major milestones so far recorded by the agency in digitalizing Air Traffic Management as evident in the deployment of ADS-C/ CPDLC and Safe Towers in the nation’s airspace, management has no option than to adequately enhance technical and operational capacity to man these new technologies in line with world best practices.’’

Posted by Zainab JUNAID at 02:48 No comments:

ZAINAB JUNAID ELESHO
THE Permanent Secretary, Ministry of Aviation, Hajia Binta Bello has called for an enhanced and strategic collaboration between Nigerian Airspace Management Agency (NAMA) and the Nigerian Air Force in the management of the nation’s airspace. Hajia Bello who was represented at this year’s Airspace Management Seminar which held at the Command and Staff College, Jaji, Kaduna State, by the Managing Director of NAMA, Engr. Ibrahim Abdulsalam, noted that this kind of collaboration between the civil and military is needed especially now to ensure success in the fight against insurgency, stressing that the deployment of Total Radar Coverage of Nigeria (TRACON) along with other Air Traffic Management technologies by NAMA has greatly enhanced the safety and security of the Nigerian airspace. Also in a statement, the Managing Director of NAMA, Engr. Ibrahim Abdulsalam stated that the deployment of Automatic Dependent Surveillance –Contract/ Controller Pilot Data Link Communication (ADS-C/ CPDLC) by NAMA would boost military reconnaissance activities as well as the discreet operations like Unmanned Aerial Vehicles (UAVs) because the data link communication provides for a unique channel of communication for the exchange of messages between each aircraft and Air Traffic Control without other aircraft being privy to the conversation. Engr. Abdulsalam therefore pledged the agency’s readiness “to support and partner with the military in the area of personnel training within the limits of available resources,’’ just as he promised to fast-track the ratification of Standard Operating Procedures for the operation of UAVs in the Nigerian airspace by the civil and military authorities. This year’s Airspace Management Seminar with the theme “Exploiting Airspace Dominance/Ubiquity in Counterterrorism/Counter-insurgency – Roles of UAVs and Radar Coverage” was attended by representatives from the Nigerian Civil Aviation Authority (NCAA), Federal Airports Authority of Nigeria (FAAN), the Nigerian Army as well as the Nigerian Navy.

Posted by Zainab JUNAID at 02:46 No comments:

Arik Air reiterates need for insurance policy
… Celebrates 9th anniversary in low key
ZAINAB JUNAID ELESHO
Arik Air, yesterday, reiterated the need for passengers to acquire the insurance policy that safeguards them against flight delays, cancellation, medical issues among other benefits.
Speaking at the airline’s 9th anniversary celebration held in its Lagos Headquarter, Mr. Chris Ndulue, Managing Director, affirmed that the insurance policy which was provided by Old Mutual Insurance Company in partnership with Risk Analysts Insurance Brokers, provides cover against accident resulting in damage to baggage, missing bags, flight cancellation and delays, medical expenses, permanent disablement or bodily injury, within 90 days of the occurrence of the accident.
Ndulue said, “The cover is valid for such incidents occurring while aboard Arik aircraft.
“Some of the benefits of the policy the passengers will enjoy include getting N1 million in the event of personal accident. A passenger whose flight is cancelled or delayed for more than eight hours gets N20, 000 per trip.
“Emergency medical expenses attracts up to N50, 000, while mishandled and missing baggage will attract N20, 000 per passenger. Damage to baggage will attract N20, 000 per passenger. All you need to do is buy Arik Air ticket online to any destination within Nigeria and buy an Air Travel Insurance for just N1, 000,” Ndulue added.
On the airline’s achievement so far, the Managing Director said though the airline started its commercial flights with only four aircraft (CRJ900, B737-300) on October 30, 2006, total fleet stands at 28 aircraft.
According to him, “We started with only Lagos- Abuja flight, now flies to 19 domestic and 12 regional/ international destinations. From 29, 363 passengers flown in 2006, as at September 30, 2015, we have now flown 17, 0304,741 passengers. Our staff strength has increased to 3, 000. We will be extending our Abidjan operations to Dakar from mid November. In the first quarter of 2016 we are hoping to commence operation to Libreville, Gabon, to increase our fleet with two Q400s, two units of CRJ 1000s and two units A330-200s; and to also start daily operation on our Lagos JFK-Lagos route, among others. 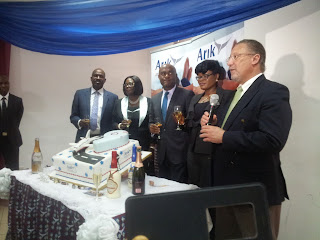 Posted by Zainab JUNAID at 02:41 No comments: