update 3 on the bristow crash

Bristow Helicopters (Nigeria) Limited, confirmed today in a release made available to aviation journalists that one of its helicopters, was involved in a water landing near Lagos at about 10.25 a.m. local time on return from an offshore platform.

According to the communique, the aircraft, a Sikorsky S-76C++, had departed on a routine crew transfer flight offshore with nine passengers and a crew of two. All persons onboard are accounted for and in the process of being transferred to a nearby installation. The company is in the process of collecting pertinent information and will release more details as soon as it is available.

However,Mr Tunji Oketunbi of Accident Investigative Bureau stated that investigation is on going. More details later
Posted by Zainab JUNAID at 09:05 No comments:

Spokesperson for the National Emergency Management Agency, Ibrahim Farinloye disclosed that his agency got a distress call this morning and immediately alerted the Nigerian Navy and officers of the Nigerian Maritime Administration and Safety Agency (NIMASA) to engage in search and rescue.

The chopper which had eleven passengers on board with a pilot and a cabin crew member sank shortly after the crash. All persons on board were rescued by combined efforts of Navy and NIMASA officials who arrived the scene of the crash on time 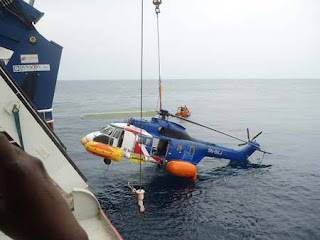 Posted by Zainab JUNAID at 06:16 No comments:

Helicopter Crashes Into Water With 11 People On Board

Helicopter Crashes Into Water With 11 People On Board

A Bristow Helicopters has crashed with 11 people  made up of nine passengers and two crew on board .
However, a source close to Bristow Helicopters told reporters that it was not a crash but a controlled ditching.
The helicopter  with registration number 5N-BJQ was said to  be  flying from Port Harcourt to Lagos.
According to skybrary.aero a controlled ditching is a controlled emergency landing of a helicopter on water. It is prompted by a sudden –on set emergency, where continued safe flight to the nearest adequate landing location of even suitable landing not ascertained.
The crash is coming barely six months after its Sikorsky S-76C with registration number 5N – BDG – 760540 crashed at Oworoshoki of Lagos Lagoon
In the 2015 crash six of the 12 people on board died, while six others survived.
The site of the crash as at the time of compiling the report was yet to be ascertained.
Details Shortly.
Posted by Zainab JUNAID at 04:50 No comments: