]Easyjet has reported a narrowing of half-year losses, helped by a rise in the number of business passengers and tight control on costs.

The carrier recorded a pre-tax loss of £53m for the six months to 31 March, against a £61m loss a year earlier.

The firm traditionally runs at a loss in the period because fewer customers fly in winter.

However, an 8.5% growth in business passengers, ahead of overall passenger growth of 4%, helped it to cut losses.

Over the past four years, Easyjet has increased the number of business travelers 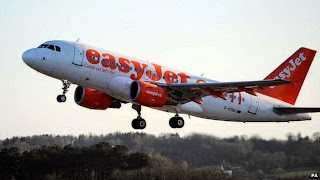 "I think allocated seating has been the single most popular thing we've ever done with our passengers and it's definitely taken a barrier away from people who would never have tried us before, particularly business travellers," she said.

Easyjet said a "ruthless focus on cost" had also helped it to narrow losses.

It said it had made annual savings worth £14m in the period, thanks in part to the benign winter weather, which meant lower de-icing costs and fewer disruptions to flights.

The airline said it was "well placed" for the second half of the financial year.
Posted by Zainab JUNAID at 02:51 No comments: