Marital distress is a phenomenon that pops up at any point in time in marriages. It is of course seen as natural phenomenon because of differences between couples, parents, families among others and if not properly addressed could escalate to a dangerous level.
Alhaji Nuraini Titilayo Odunsi, Amir, Islamic Study Group of Nigeria, ISGON,and Dr. Fauziyah Taiwo Oduguwa, Consultant Psychiatrist, Psychiatric Hospital Yaba, Lagos spoke as guest speakers about tips for couples dealing with marital distress at the 1436 AH/2015 annual seminar of The Criterion held on Sunday 22nd February 2015/ 3rd Jummal Awwal, 1436 AH at the Lagos State House of Assembly Mosque.
The topic “sustaining social and spiritual stability in time of marital stress” became a major concern because majority of our Muslim women erroneously believe that they are at the receiving end in their respective marital relationship, or put differently they believe that they are at the mercy of their male partner as far as Islamic marriage is concern, whereas the authentic sources of the Quran and Hadith of the holy Prophet (SAW) is very clear about the restoration of women’s rights in all the sphere of human endeavor including marriage that is contracted according to Islamic rules.
It is not as if men are not affected by these marital stress, but research has revealed that the social and spiritual effect are common in women more than men and the reason is not far-fetched (Islam provides that men-folk can marry more than one woman), an important provision that exclude women folk, hence the aforementioned after effect is prevalent among the Muslim women, which is not supposed to be the case if we understand our religion simply because Almighty Allah (SWT) always take human weakness into consideration, before He prohibit, the reason must be logical if we can reflect deeply. Secondly He (Allah) must have provided alternative to that which He prohibit. 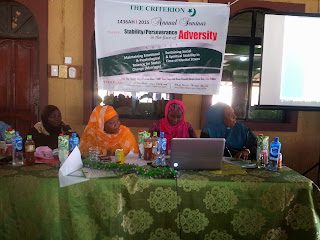 They pinpointed some causes of marital stress and provided tips on how to deal with them:
The potential changes in circumstances that can possibly arise in a marriage leading to social and spiritual instability especially in women according to him include:
• Failure in the spouse obligation: Q4:34 explain that "Men are the protectors and maintainers of women, because Allah has made one of them to excel the other and because they spend from their means. Therefore the righteous women are devoutly obedient and guard in the husband's absence that Allah orders them to guard. as to those women on whose path you see ill-conduct, admonish them, refuse to share the beds, beat them, but if they obey you ,seek not against them means. Surely, Allah is Ever Most High , Most Great"
And the Prophet (SAW) said “The best of you is the best to his family and I am the best among you to my family”. He also said “The most perfect believers are the best in conduct and the best of you are those who are best to their wives”(Ibn Hanbal No.7396)

 Infertility & Reproduction: Infertility related stress is known to take its toll on relationships, and now a new study shows it can also affect the success of fertility treatments. Researchers reported that the stress of infertility on marriages is a stronger predictor of divorce, particularly relationship that lack understanding of ISLAM (i.e. FAITH). It was reported that the most marital stress required more assisted reproduction cycle to get pregnant than women who reported less stress in their marriages. The bottom line is that if infertility is causing a lot of stress in a partnership it could very well have an impact on whether the woman get pregnant or not.

 Unforgiveness : Of particular interest for understanding negative reciprocity are the findings that greater commitment is associated with more constructive , accommodative responses to a partner's negative behaviour and that the dis-positional tendency to forgive is a predictor of spouse's responses to their partners transgressions. Hence spouse's, having a greater tendency to forgive are less likely to avoid the partners or retaliate in kinds following a transgression by the partner. Indeed , spouse's themselves who do not acknowledge that the capacity to seek and grant forgiveness is one of the most important factors contributing to marital longevity and satisfaction will definitely be overwhelmed with marital stress.

 Lack of social and emotional support: Studies have however found that women who perceive a lack of emotional and social support are more likely to suffer marital stress.

 In-laws and Friends: In this part of the world where the self is only seen and recognised as an integral part of others, it is very difficult for couples to separate themselves from significant others. Therefore for many couples the first few years of marriage is usually a period of adjusting to each other's friends and families.

 Widow and Widower: Sudden death of a partner at his or her prime age, resulting in the other partner becoming a widow or widower at the early stage of marriage.

 Divorce resulting from unreasonable behaviour from one of the partner.

 Separation due to irreconcilable differences between two partners

 Abandonment due to the arrival of the new wife or relocation 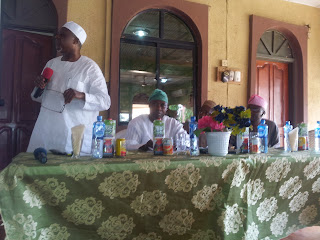 The speakers both affirmed that Marital stress is worst when partners take their stress out on each other. Spouse may be blamed even when it is not his or her fault, because she or he is the one who is there for you to take out their anger.
"There are tons of ways to reduce or control marital stress,"they said. Developing a healthy and mature relationship with partners has helped to manage the stress of marital relationship.
The following tips should help break this cycle:

 Taa-lim/Prayer session : Every Muslim homes should engage in acquisition of knowledge from Quran and Hadith. They should also ensure that Allah's dictates become their live ideals and cultivate attitude. Through this, increase in Iman is achieved. Religious practice is also related to positive outcomes for the stability and quality of marriage and well behaved children. This nurtured home grown understanding of deen is fertilized with fear of Allah to generate greater sense of wellbeing, more satisfaction and in most cases less likely to commit act of domestic violence.

 Constituting counselling body : This unit must maintain high level of confidentiality and expected to proffer timely and adequate advice

 Healthy communication is key : Partners should learn to resolve conflicts without doing damage to the relationship or to each other. They should learn to develop the capacity to be genuine and heart--vulnerable. Listen without judgement.

 Spend more time alone together: Many couples get so busy that they lead separate life's and understandably feel disconnected. Schedules regular dates to be together and discuss serious conversation.

 Ask partner if anything is upsetting him or her: Talk with partner and ask what is bordering him or her. Do not try to guess.

 Ask each other of what you need: it is important to tell your partner what you want and need.. The more specific you can be the more likely your partner will be able to do it.

 Forgiveness: Forgiveness is important for a successful marriage. on the other hand, both men and women can improve their health by marrying wisely,working hard on solving marital problems and avoiding cataclysmic conflict. 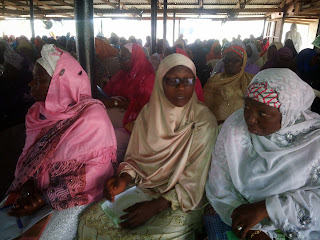  Engagement in a serious business enterprise or educational pursuit

 Integrating widow and widower into the society: This will enable them live an happy life , socialize freely, increase their level of IBADAH and encourage them to contribute their quota to the upliftment of the Ummah.

Posted by Zainab JUNAID at 01:47 No comments:

A release signed by Olajumoke Adetona, Ag GM, NAMA stated this adding that the ATCs who cut across different cadres got their ratings after successfully passing the oral, practical and written examinations conducted in Lagos, Abuja, Kano, PHC as well as Benin airports and supervised by the regulatory authority.

It added that a total of 43 ATCs took part in the rigorous rating examinations held between November and December 2014 on Aerodrome, Approach Radar, Area Control Surveillance but 40 were successful.

While commending the successful ATCs, Engr Abdulsalam Ibrahim, Managing Director of the Agency was reported to have expressed confidence that the latest ratings would further boost the critical manpower need of NAMA especially in Area Radar Control Service.

He stressed that as part of management strategy to build a roboust safety infrastructure across the Nigeria Airspace, training and retraining of critical manpower has remain the focus of his administration.
Posted by Zainab JUNAID at 03:46 No comments:

The Criterion, an Organization of Muslim Women in Business and the Profession, Lagos District, has announced plans to hold its 1436 A.H/22nd of February 2015, Annual Seminar with the theme: Stability/Perseverance in the face of Adversity.
Speaking on the One-day event, the District Public Relations Officer, Tijani K. O affirmed that the seminar slated to hold at the Lagos State House of Assembly Mosque, Ikeja, will expose the attendees to inspirational and Soul uplifting lectures from high profile speakers with expertise in various fields on the theme.
The Theme for the day are: Maintaining Emotional and Psychological Balance for status Change(Marriage); Sustaining Social and Spiritual Stability in Time of Marital Stress with Dr Fauziyah Taiwo Oduguwa and Alhaji Nurain Titilayo Odunsi as Geust Speakers.
The seminar will also give room for free Medical Checkups and ample opportunity is available for buying and selling of goods.
On this development, The Criterion President for Lagos District, Dr Yaqub Jameela noted that the theme for the Seminar was specifically chosen due to the increasing rate of divorce in the Society and to her "The Association believes that when the home is stable, it translates to a better Society for all,"
Posted by Zainab JUNAID at 05:19 No comments: